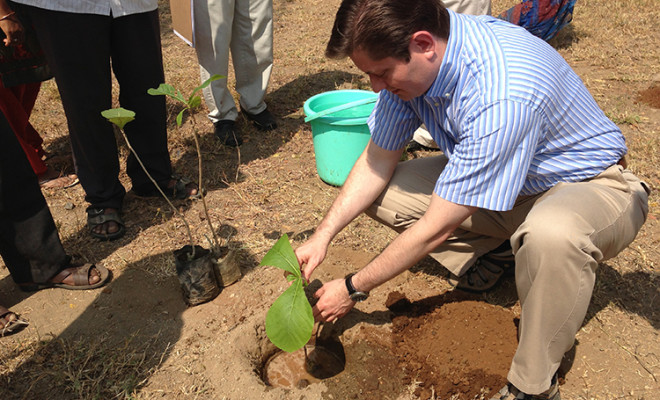 Houston business leader Marty McVey, 41, is the youngest candidate in the 2015 mayoral race. If elected, the high-energy statesman will be one of the youngest mayors in Houston history. He brings a fresh, vibrant view of government.

McVey began traveling to India at age 35; he has been to Mumbai, Delhi, Chennai, Bangalore, and Hyderabad. He plans a trade mission to Southeast Asia as mayor because he sees India as a gateway to Houston’s international growth. There are already more than 155,000 Southeast Asians in Houston and McVey has spent the past few years interacting with them at several venues such as the India House and addressing their cocerns that include the Nepal disaster and relief measures.

“I look forward to bringing our two nations closer together through commerce,” says the young proponent for real economic development.

While his opponents in the November 2015 race for Houston’s top job talk about fixing potholes, McVey has been in the trenches helping growing nations build long lasting infrastructure.

In 2011, he was honored to be appointed by President Barack Obama to travel over the world as a member of the Board of Directors of the United States Agency for International Development (USAID) Board for International Food and Agricultural Development (BIFAD). USAID plays a critical role in US efforts in stabilizing regions and building responsive local governance; the agency addresses many of the same problems as military interventions, but uses a different set of tools.

McVey has been proud to be a part of the efforts to ease the transition between conflict and long-term development by investing in agriculture, health systems and democratic institutions. USAID extends help from the American people to achieve results for the poorest and most vulnerable around the world. That assistance does not represent Democratic values or Republican values, but American values. It has also afforded McVey the opportunity to travel and build relationships all over the world.

Responsibilities with the agency include providing guidance to the federal government regarding investments in training, research, and technology transfer to developing countries. As part of these responsibilities, McVey served as Chairman for the Haitian Reconstruction Task Force, as well as Chairman of the BIFAD Budget Committee.

McVey’s unfettered passion for India and Souteast Asia stretches to all cultures who are poised to join with Houston’s engines in energy, technology, manufacturing, robotics, maritime, aviation and transportation.

“Houston has all the tools necessary to be the epicenter in the international business arena,” says McVey. “This highlights how much Houston needs a mayor who will create a world class economic development team to attract new national and international businesses to the Bayou City. I want this team to report directly to the mayor as it is the lifeblood of our city.”

He has embraced the splendid culture in the way he creates special evenings for his guests in Houston, often dining at Kiran’s on his favorite Indian cuisine of daal makhani, tikka butter chicken, saag paneer, naan paratha, and of course, a hot cup of chai tea at Kiran’s. His most beloved Indian film is Before the Rains by acclaimed Indian director Santosh Sivan – and produced by Houston entrepreneur Ashok Rao – set in the 1930s against the backdrop of a growing nationalist movement.

“Even though India is now a donor country, it’s still a developing nation,” says McVey. “It’s always been a great country culturally and has now taken its place on the world stage. They’ve done a fantastic job of managing their wealth. India has evolved as the exemplary model for foreign aid and development. One of India’s four U.S. consulate general offices is located in Houston. That’s a partnership we need to build on.”

We now have two sister cities in India. We were outgunned by San Antonio on bonding as a sister city to Chennai, population 700,000 and a big player in healthcare. “Houston really wanted Chennai as their sister city and it made life difficult for us,” said then San Antonio Mayor, Phil Hardberger. “But we just flat outworked them.”

“While Houston has 18 sister cities, Laredo has 29.  I intend to change that,” says McVey, the determined diplomat.

“Houston was voted as the best city for young entrepreneurs by NerdWallet,” says McVey. “Not very many people realize that. In the skilled labor market today, people do not necessarily follow jobs. Instead, jobs appear to be following people. In an economy dominated by services and constant innovation in transportation and communication technology, labor has become the most critical factor for many firms. The skilled segment of this workforce has grown to be even more significant. A talented labor pool is no longer a luxury; it is a staple for competition in the global marketplace.”

“There are so many hidden gems in Houston – 62,900 acres of park space, and the 350 miles of bike trails. We can grow that. Already, Houston is the No. 1 destination in America for night life, according to National Geographic. More than 90 languages are spoken here.”

McVey’s civic engagements are far-reaching. He has been a major supporter of charitable organizations that include Halo House Foundation, Human Rights Watch and the World Affairs Council. He is a lifetime member of the NAACP, a National Advisory Board Member of the Tahirih Justice Center, and a committee member of the Bush-Clinton Ike Coastal Recovery Fund. He is also actively involved in promoting the economic development and sustainability of the City of Houston, and served as an executive committee member and former Chair of the Political Engagement Committee of the Greater Houston Partnership.

McVey founded a private equity firm that spurred the creation of award-winning businesses in the Real Estate, Clean Energy Services and Healthcare sectors.

Some of Marty’s Favorites

Last movie he saw: Focus, with Will Smith

Last book he read: The Art of Happiness by

Michelle Leigh Smith is a Houston based journalist. She is a graduate of Rice University and serves on the Executive Board for the University of Houston’s Friends of Women’s Studies, as Program Chairman of the Rice University Owen Wister Literary Society and on the 2015 Houston Livestock Show & Rodeo’s Lamb & Goat Junior Auction Committee