Finding ways to give back, USAID board member considers mayoral run

CORRECTION: Marty McVey is a member of the International Food and Agricultural Development Board of Directors, not the director. He is also in his forties, not thirties.

When one walks into Marty McVey’s conference room, it’s hard not to notice the various picture frames scattered all over the walls.

On one shelf, there are photos of him with Mayor Annise Parker, as well as a picture with Vice President Joe Biden.

There are picture frames lining the wall containing two White House invitations, with the First Family posing with McVey in front of a chimney, smiles all wide. These are the perks of being a member of the International Food and Agricultural Development Board of Directors of the United States Agency for International Development.

It’s safe to say that in McVey’s 41 years, he’s had an interesting life. After the all adventures he’s had, it makes one wonder what brought him to Houston. 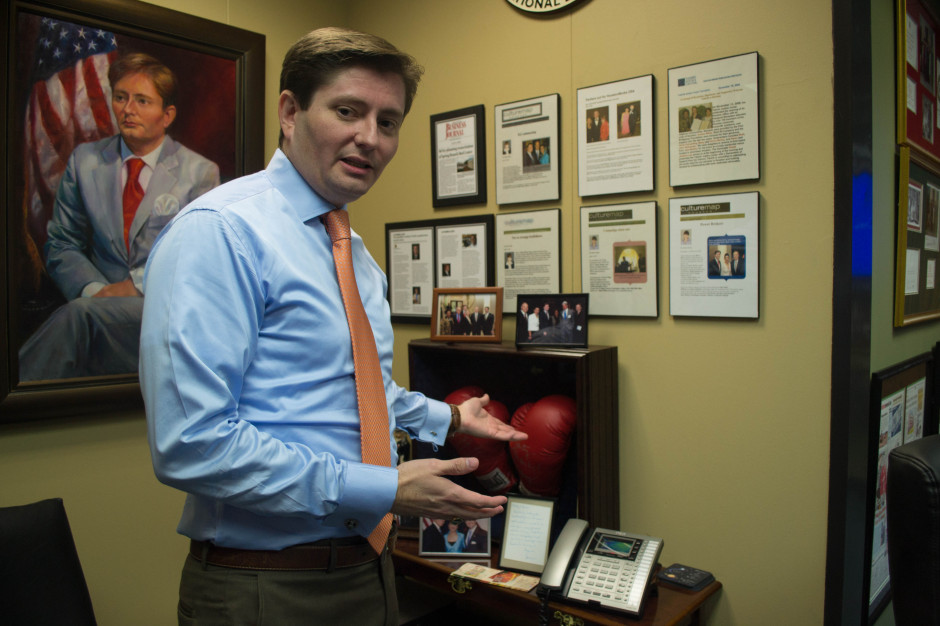 “Well, first of all, I love Houston, and I believe in Houston,” McVey said. “This is a great city, and I wouldn’t live anywhere else in the world.”

He said he travels a lot “on behalf of the American people” and for both “private and business interests.”

“All roads lead back to Houston,” McVey said.

As for McVey’s association with UH, he recently presented the lecture “Diplomacy and Development in Conflict Countries” in October, and will return to give another lecture in the spring semester, possibly in March.

He said, however, that he would actually be visiting the campus more often than usual, because he is considering running for mayor of Houston.

“If I were to run for mayor, the reason is one word: You. You are the reason and every other citizen in Houston,” McVey said.

“I think the city is at a great opportune time for further growth and advancement. I think that growth comes with a lot of challenges, and just as when you’re growing up, small businesses have growing pains, and the city’s going through growing pains now.”

McVey says he sees some drastic financial concerns coming up in 2015 and 2016 and adds that if he were to run, he would make sure the city is in a good place years from now “before it can be handed off to another mayor.”

He said one of the things his parents instilled in him and his siblings was to search for ways to give back to the community.

“There’s many ways to do that,” McVey said. “It’s through a kind gesture; it’s through charities and nonprofits, helping out neighbors, and serving in public office. All of those things are important; we’re all Houstonians, and we’re all in this together.”

McVey originally planned to join the military, but an accident that occurred while he was a teenager prevented him from enlisting. He decided instead to go into business.

“I like creating. I like the freedom to foster ideas, (to) create something that wasn’t there before, and it’s been the right choice for me,” McVey said. “There’s great joy in giving back.”

He wears two hats: as president of McVey and Associates, a private equity firm, and as a USAID director.

McVey said his work-life is like that of the reality show “Shark Tank.”

“I told someone recently that in my business, I swim with sharks every day,” McVey said.

While talking with him, the phone rings, with a gentleman on the line needing McVey’s assistance.