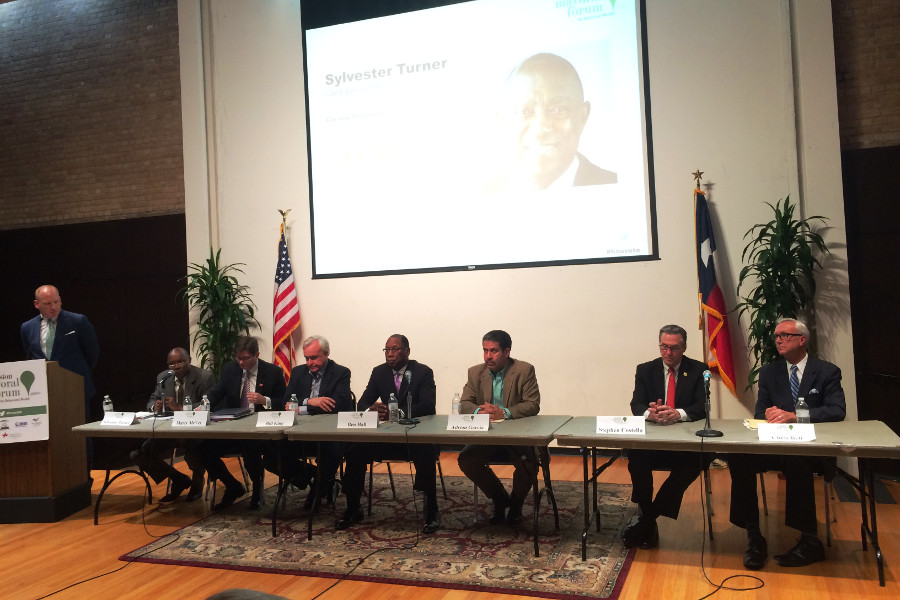 “One of the things we have to do is change the way we think about this,” said former mayor of Kemah Bill King, “we’re still largely trying to address this as a criminal justice problem — it’s not. [Criminal justice] is based on the idea of culpability and that people have a choice.”

King acknowledged the city’s limited role in creating rehab programs and providing care for the mentally disabled. He cited bureaucracy as the reason why state funding is funnelled away from this issue. As for rehabilitation centers for those not able to afford treatment, King said that there was some, “money that [could be] moved around,” in the city’s budget.

Ben Hall agreed, “Mental illness is not a crime. We’re treating it as though it’s a crime to have a mental struggle.”

When asked if he would commit to continuing the current funding for the existing mental health division in HPD, Hall replied with a steadfast no. “It needs more funding,” he said.

Former sheriff and city council member Adrian Garcia, who started the Crisis Intervention Response Team in 2008, also supported a rise in funding for law enforcement’s crisis response. Garcia called mental health one of the “most significant issues” in his administration.

Marty McVey’s initiatives centered on funding housing for homeless vets and addicts. McVey, whose sister was mentally ill, called mental health a “very important issue,” and said that more must be done to help people without family or resources.

Steve Costello said he planned to create a program to divert people that were being sent to jail for mental illness related incidents to a facility where they would be treated as patients.

“We can’t close our eyes and wish this problem away,” said former Representative Chris Bell, “…Houston is the fourth largest city in the country. It’s time we started acting like it.”

Among the candidates’ ideas for law enforcement reform dealing with the mentally ill and substance addiction were diverting 911 calls to a help hotline. Such a hotline would supplement the Houston Police Department with behavioral scientist liaisons and possibly remove police officers from the situation altogether. In the most severe situations, police officers could be substituted with the Crisis Intervention Response Team, a division of HPD.

Jennie White got what she wanted from the forum, “They’d never really said much about it before, and this is a big issue for me. I think I know who’s got my vote now.”

Ted Isensee was there on behalf of his foundation, the Isensee Foundation for Safe Police Response. Isensee, whose son was killed in a police standoff at the height of a suicidal episode, looks to the candidates to provide insight into their plans to de-escalate encounters, “We want to keep everybody safe.”

“I’m here to see what each candidate is willing to endorse as far as the future of mental health for Houston,” said Tony Pastel, of the Mental Health and Mental Retardation Authority.

None of the candidates address mental health on their official campaign websites — a fact not lost on the attendees. “None of them have really said much about how they would decriminalize alcohol and drug addiction,” said Ron Charney, whose sister is in recovery from a lifelong opiate addiction, said that, “I just want to know she’ll be OK if I’m not there.”

With the mayoral race about to hit its “home stretch,” as Bell put it, the general consensus among the candidates was that mental health policy reform will play a big role in any of their administrations. Whether or not that is actually the case will be determined at the voting booths on Nov. 3.

The seven contenders were invited by Houston Mayoral Forum on Behavioral Health, Mental Health America of Greater Houston, The Council on Recovery, The Houston Recovery Initiative and The National Alliance on Mental Illness to the forum hosted at the University of St. Thomas.